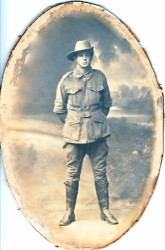 Samuel James Stanley Carnell [Stanley] was the third of four children of the marriage between William Carnell [Snr] and Eliza Dawson. William's first wife had died in 1888[ four children by that marriage]. The family lived at Mt Pleasant [North Pine] and later at Obi Obi / Teutoberg [Witta] .[See William Robert Carnell]
Stanley was a stretcher bearer and won the MM. [insert war history]
Stanley married Connie Flatman and became a policeman. Stanley and Connie were living in Bundaberg in the 1960's. Stanley and Connie did not have any children.

Photo courtesy of the Carnell family.