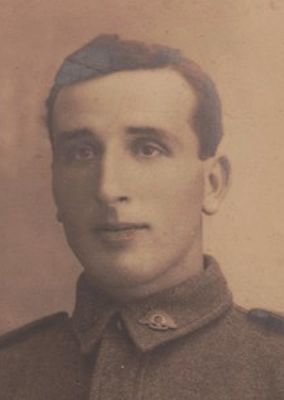 The Chronicle of 24 Sep 1915: Obi Obi - Wed 8 September a number of Obi Obi and Mapleton and other folk assembled at the Obi Obi Hall for the purpose of farewelling Mr Jack McKinnon, eldest son of Mrs and Mrs A McKinnon. The young man is now in camp getting fit to pot Turks. Having a good door, good music, good singing and willing dancers everyone appeared to have a good time. Mr McKinnon was presented with a wristlet watch, and expressed the hope that on his return from Europe he would not only be wearing a watch but also the V.C.

John McKinnon never fulfilled that wish for he was killed in action July 20 1916 and was buried at Eaton Hall Cemetery, 2 ¼ miles East of Laventie, 4 miles south south west of Armentieres, the Rev. F.C. Ward officiating. For the next two years John’s mother wrote to the army requesting the return of his possessions which would have included the watch presented by the local community. Finally in September 1918 Mrs McKinnon was informed that it was unlikely any effects would now be found due to the length of time since John’s death.

The Chronicle 16 August 1918 p4, MAPLETON. Presentations and Returned Soldiers.
The Mapleton hall on last Wednesday, the 7th instant, was the scene of a very pleasant function, when a Welcome Home was tendered and presentations made to the Mapleton returned soldiers. The recipients were Lieut. G. A. Still M.C., Lieut.J.R.Allbrey, Messrs.Harry Chinn, F.D.Lound, C.H.Williams, E.K.Harvey, Don Cogill, W.Jorgensen, A.D.C.Hetherington. Framed certificates were also handed to the relatives of the late J.McKinnon, J.J.Logan, and R.Logan, who have made the supreme sacrifice, and (to use Lieut.Still's words)'have gone West'. The presentations were made by the Association's president, Mr.W.J.Smith, whose remarks were supplemented by Mr.J.R.Morris. Both speakers referred to the gallantry of the Australian troops, and incidentally stated how distinction had been brought to Mapleton by the award of the Military Cross to Lieut.Still and military medals to Frank Pope and Robt.Swinton....more...
The address presented to the soldiers reads:-
Mapleton Progress Association, The Great War, 1914 - 19
To.......
Dear Sir,
On behalf of the Mapleton Progress Association we desire to express to you our high appreciation of the services you have rendered to your King and Country, in this, the greatest War in history. The grand sacrifices, and noble heroic deeds performed by our soldiers have carved for Australia a niche in the Temple of Fame, which will endure as long as time lasts a glorious chapter in the Empire's story.
We admire and honour the splendid spirit of patriotism in which you responded to your Country's call, and the high sense of duty which led you to voluntarily take up arms in the defence of Liberty, Truth, and Justice.
With best wishes for your future, and in deep sense of gratitude for your services.
We have the honour to be, dear Sir, your obedient servants, for the Mapleton Progress Association, W.J.Smith, President
D. F. Story; Secretary,
Mapleton Progress Association, Mapleton, 1st July, 1918.

John McKinnon, the son of Alexander McKinnon and Alice Gravener, was 20 years and 6 months old, when he enlisted. His occupation was sawyer, so he was young and fit and ready to serve. He fought in the areas of Tel-el-Kebir, Alexandria and Marseilles France, where he was killed in 1916. Reported by the Reverend F.G. Ward, Chaplain attached to the 8thInfantry Brigade.
John McKinnon was buried at Eaton Hall Cemetery east of Laventie and south of Armentiers. His final resting place is noted at Rue Petillon Military Cemetery, Fleurbaix Grave no. 31.
Source: National Archives; Australian War Memorial; Commonwealth War Graves Commission.

Killed in action
Did not return

Photo of Buderim Tramway Locomotive with wagons, passenger carriage and guards van ca 1920. Standing beside the locomotive is Jack McKinnon (Right) and McDonald (driver). Ref: Sunshine Coast Library. M180217.
[The date ca 1920 cannot be correct as W.H. MCDONALD was the Engine driver from 1913 to March 1917. Jack enlisted with the AIF on 19 July 1915 so the photo has to be before that date.]