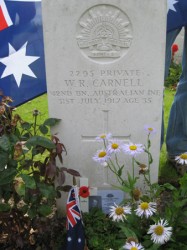 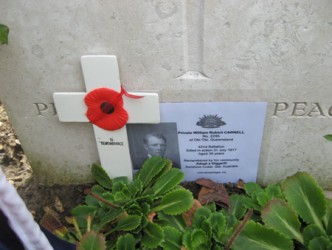 William Robert was the eldest child of William Carnell[Snr] and Elizabeth nee Pritchard. [The children were William,Stephen,Ruth,and Pritchard]. He was born in Brisbane and the family lived at Mt Pleasant. William's mother died following the birth of her 4th child, Pritchard, in 1888 and after a couple of years William Snr remarried to Eliza Dawson. They had a further 4 children [Norman,Florence,Stanley and Jane]. In the late 1890s or early 1900s the family moved to Maleny / Obi Obi. At some time William acquired/selected a farm at Teutoberg. Teutoberg was renamed Witta due to the strong feeling about the war. This happened in quite a few places that had German names at that time. HOME LIFE; We know that William snr was a farmer at Mt Pleasant. They grew vegetables and other crops. When they moved to the Obi Obi/ Maleny area, they farmed, bred Clydesdale horses, and William Snr's death certificate lists him as a sawyer so he must have owned or worked in a sawmill/or associated timber industry. Ruth married but died in 1910 [Brights disease-associated with pregnancy], and William Snr was so affected by this that he moved to William Jnr's property at Teutoberg and became much a recluse. Stephen was killed while tree felling at Tolga on 16 August 1915 and William Snr died a couple of months later from a stroke [ broken heart you would think] Our William Robert Carnell then enlisted on 31 January 1916 [INSERT WAR HISTORY] He was Killed In Action on the 31 July 1917. He was 35 years of age, was not married and left no children.

William willed his share of the property to his Brothers and sisters with his Step-mother named as Executor and it was sold after a few years. During the war, William's brother, Norman married the girl next door, Rose and Norman was responsible for winding up the affairs of William`s property. In a card written to Norman, Pritchard [see adopt a digger]asked Norman whether he been to Teutoberg [meaning we presume, Williams property there.]

The Chronicle 3 May 1918 p5 printed Roll of Honour memorium for William Robert, eldest son of the late William Carnell, killed in action Messines Ridge 31 July 1917 inserted by his Mother, Brothers and Sisters.

The Chronicle 3 May 1918 p5, OUR HONOUR LIST. APRIL'S ADDITIONS. April unfortunately made up for the welcome deficiencies of March in the supply of casualties amongst the lads from our district. List No. 393, on the 26th, was one of the cruellest yet. As killed in action, Pte. Wm. Robt. Carnell, of Obi Obi, 31st July 1917 (previously reported missing, 1st Aug. 1917).

Killed in action
Did not return

Photos courtesy of the Carnell family.