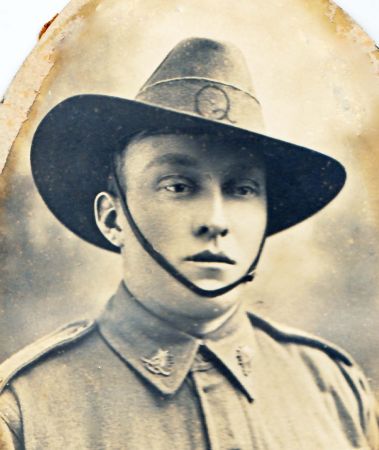 Born in 1889 in Maidstone Kent, Wilfred was the son of George Ernest Banks ( publican) Alison Louise Banks (nee Orford). According to the 1901 UK Census Wilfred was still living in England but his father had already died and sometime after 1901 his mother died. After the death of his mother, Wilfred and his sister Eileen (b1899) travelled to Australia where their mother had Orford family living in New South Wales.

Wilfred joined up on the 21st of March 1917 at the age of 27. His record described him as being 5 foot 8 1/2 inches tall, 145lbs, of a fair complexion, grey eyes and he is noted as being a farmer from Obi Obi. He gave the next of kin as his sister Eileen Banks, also of Obi Obi. Incidentally, Eileen was to marry the day before Wilfred was killed. It seems Wilfred had attempted to join up at some time before but had been rejected on medical grounds. We don't know when that was but by 1917 it seems that the medical criteria for enlistment had fallen sufficiently for Wilfred to be considered fit enough to join up. Wilfred initially joined the 11th Machine Gun Company (12th Reinforcement) and was based in Seymour, Victoria and undertook basic training in Seymour from the 2nd of June 1917 until November when he was embarked on HMS A71 Nesor at Melbourne bound for Suez, Egypt where he arrived on the 15th of December.

After spending only one month training in Egypt, Wilfred embarked on HMS Abbassieh bound for Southhampton on the 13th of January 1918 when he arrived nine days later and was immediately transferred to the 9th Battalion at the depot training camp at Sutton Verny where he undertook more infantry training. On the 23rd of April 1918 he was admitted into hospital with tonsillitis and was discharged shortly afterwards and then departed England for France on the 29th of April arriving at the AIF based depot at Etaples on the 30th of April and after further training Wilfred was officially taken on the strength of the 9th Battalion on the 9th of May 1918 and given a new service number of 702a. At the time his Battalion was based at Meteren-Strazeele only 20 km from Ypres on the front line which was an active area at the time. Within two days of arrival Wilfred's battalion participated in the small engagement to strengthen the line. So Wilfred's baptism of fire was not long in coming. By the 14th of May 1918 the Battalion was withdrawn from the front line and took up a reserve position where they undertook further training reorganisation. On the 23rd of May 1918 a Battalion dinner was hosted when "a very enjoyable evening was spent", whilst on the 25th of May a concert and cinema show was held. A sports day was also to be held during their rest period but was cancelled due to poor weather.

By the 27th of May 1918 his Battalion once again moved up to the front line where they were subjected to continual shellfire in the next few days whilst the months of June and July were also spent in or around the front line around Ypres.

By the summer of 1918 the war finally seemed to be going in the favour of the Allies who had stopped the German offensive of early 1918 and now the Allies were preparing an offensive of their own to push the Germans back towards the Hindenburg Line and hopefully a breakthrough into Germany. Early August saw the 9th Battalion head south to the Somme Sector where the British were beginning the Hundred Days Offensive around Amiens and along the Somme river. On the 8th of August the Australian Corp (2nd and 3rd Divisions) attacked in the battle of Amiens supported by tanks, aircraft and artillery and the attack was a resounding success with the Germans withdrawing along the Somme. By way of follow-up the 1st Division ( which included Wilfred's 9th Battalion went into action on the 10th of August to seize Creppy Wood and advanced towards the town of Lihons. They attacked under heavy machine gun fire but successfully captured their objectives. The Germans counter-attacked late in the day but were successfully beaten back. At some point the 9th Battalion was also subjected to a gas attack and no doubt Wilfred was forced to wear his extremely uncomfortable gas mask. This was Wilfred's first real battle and it was a resounding success. The Battalion captured the ground expected of it plus 90 prisoners, two batteries of howitzers of four pounds each, 13 machine guns, two trench mortars and then a complete phonic installation. However the 9th Battalion casualties were recorded as being very heavy. The following day the 9th was in active support to the brigade as they continued their advance on the Somme. At some point elements of the 9th Battalion were involved in a bayonet charge against a formation of Germans and captured 28 prisoners. Again we don't know whether Wilfred was involved in this but he was certainly with the Battalion in the vicinity and one would like to suppose that he took part. That evening the Battalion was relieved and retired to a rear area. In the two days it had suffered casualties of 12 officers 166 other ranks.

The 9th Battalion was pulled back from the front line to rest around the town of Vaire until the 21st of August 1918 when they were advised they would go back into action the following day. On the morning of the 23rd of August 1918 the 3rd Brigade went into action along the banks of the River Somme. The British front line ran due east from the river to the town of Proyart down to the marshy banks of the River Somme . The Germans were deployed on a ridge centred on Chuignolles. The 9th Battalion was to act as a support to the brigade with orders to advance once the first objective at the foot of the Chuignolles Ridge had been taken. At 4:20 a.m. on the morning of the 23rd of August the battalion moved into its starting position outside of St Jermaine Wood to await developments of the upcoming attack which began at 4:45 a.m. By 11 a.m. the first objective had been gained and orders were given to the 9th Battalion still in reserve to move forward at 2 p.m. A hot meal was provided at 11:30 a.m. The 9th Battalion war diary states that up until the attack commenced at 2 p.m. they had suffered no casualties so we can be sure that Wilfred was still alive when the 9th Battalion went into action that afternoon. The 9th Battalion was deployed with A company on the left next to the River Somme and C company on the right with the B & D companies in support. The left flank was anchored on the River banks. As we know the exact location of the Battalion when it went into action we can be fairly certain exactly where Wilfred was when he received the wounds which killed him. The Battalion advanced at 2 p.m. and once they reached the exposed slopes they were subjected to a horrific barrage of shells and gas which caused heavy casualties and which delayed their advance considerably. However the attack continued through the marshy banks of the River Somme towards Froisey Beacon with little resistance from the Germans other than the constant artillery barrage. They captured two artillery pieces as they went. As night fell the Battalion had gained the heights above Chuignolles and were deployed in and around the Merly Wood - casualties had been 4 officers and 50 other ranks one of which was Wilfred. We now know how he was killed but according to his service record he was wounded at some point on the 23rd of August. Given that most casualties were incurred during the intense artillery barge commencing at two o'clock it is possible that it was here that he was initially wounded. He was moved to the First Field Ambulance post at Morcourt only some 6 km from the front line where he died at some point during that day. Wilfred was one of 10 Australian soldiers who died at that aid post that day. Wilfred was buried at Heath Cemetery (Plot II, Row B, grave 12) whilst he is commemorated at the Australian War Memorial Panel 55 in the Commemorative Avenue. 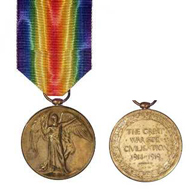 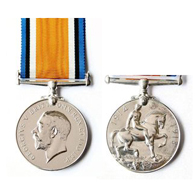 Headstone photo and others taken at Heath Cemetery, courtesy of Grant Thorne.